I live in a Pig Palace 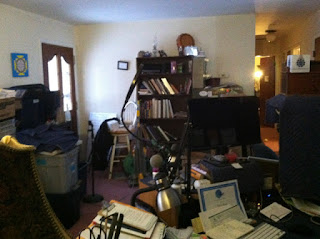 I don't remember how young I was.  Much too young, I'm sure.  I was probably caught between the trap of being a preschooler, an only child, having a "pack rat" father and a tidy mother, and never having been taught how to declutter and purge.

Inevitably I got to an age, probably 5 or 6 at most, where I was expected to have developed cleaning habits and skills in the face of a daunting amount of STUFF in a room much too large for someone my age to be fully in charge of.

I was commanded to clean my room and left to carry out my marching orders, and being a typical young child, I had no way of determining exactly what that meant.  Being born of a pack-rat I'd come across favorite treasures or long-lost companion objects or books and get distracted from the task-at-hand.  Eventually a parent would come to check on my stalled progress and instead of redirection and coaching or instruction, I felt like I was getting blamed for having missed something important even though the instructions were never specific.

Deciding that the expectation was unreasonable and unattainable, cleaning became a game of shoving as much STUFF under whatever objects I could get away with.  Beneath the bed behind the dust ruffle, in the back of the closet, in drawers, under or behind furniture.  Much of the time these ploys didn't work.

Never did anyone sit with me and help me make decisions about my items.  No one asked where an item belonged.  No one helped me determine whether an item was still useful.  I was still playing with my preschooler circus train set with my barbie dolls when I was 9 or 10 years old.  It's a testimony to my imagination, and that I wasn't too spoiled (never had the Barbie car or the Barbie house, so I made do with what I had).

I'm not sure exactly when the name-calling began.  I know I was very young.  Keep in mind that the younger a child is the more impressionable they are, and the stronger the commandments of the parents.  "Your room is a mess" is a holy decree when you're young enough.  It's a statement of fact.  It's indisputable.  It's reality as proclaimed by someone who is omniscient.  And this statement gives no hope or promise of the possibility of change.

Name-calling is even worse.  "Your room is a pig sty."  Whether they say it directly or not, if I live in that room I must be a pig.  "You're a slob."  As sure as you are male or female, you are also a slob.  It's just something you are.  It's neither something you have control over nor anything you can aspire to change.

I've tried all my life to do better in keeping my environs clean, but deep down inside I have what I'd call a "High Mess Tolerance."  Once I reached puberty, occasionally my mother's side of my gene pool reared it's head and I'd get into a compulsive cleaning kick.  I'd stay up until all hours and rearrange my room and do something miraculous.  But this work is so exhausting that it doesn't last and is far from a habit of being tidy.  The rare appearances of my tidy binges can't combat the pack rat mentality.

And I realized why the pack rat wins over the neat-nick.  Because I've invested myself in living up to my parents' expectations.  You simply can't fight your parents when you're very young.  I had no idea they were wrong for saying those things, and no way to fight back, so I did the only thing I could do to maintain my grip on sanity: I gave in.  I believed it.  And over 30 years later, I realize that I still believed it.  No matter how often I tell myself that I can clean now, that I can take care of the mess and keep it at bay -- I prove myself wrong by burning out.

But they talked about the mess, me being a slob, and disgusting.  And I watched enough Odd Couple to know what they meant, and they even compared me to Oscar Madison.  So when left to my own devices, I would turn into Oscar.  With one exception.

They never ragged on my organizational skills.  It's ok to have order in your sloppy chaos of a house.  It's ok to know where everything is within the "Your room looks like it was hit by a tornado!"  So I have made an art of staying very organized inside my mess, to the point of organizing information in binders, having and using a file cabinet, etc.  It's amazing, despite being proclaimed a doomed pig, I can still see some of that Felix Unger, some OCD in my pack rat mentality, in my inability to purge and let go.  If I marry the pack rat and the tidy neat-nick, I'd possibly be functional.

Even when I really tried to clean, I was never complimented for the things I had accomplished, never given kudos for the effort or for maintaining my focus in cleaning.  My teenage 3am cleaning binges got jaw-dropping astonishment in the morning, but no real pat on the back or celebration or acknowledgement of the inner neat-nick who was dying for a breath of air.

So now I'm entering a new phase of awareness with myself, tackling something that never was in my waking brain before, and digging deep at the roots.  I'm doing so right now with the help of http://flylady.net - a website for people immersed in CHAOS (Can't Have Anyone Over Syndrome).  I'll be working on purging the triggers and self-image issues using EFT (Emotional Freedom Technique), too.  Soon I will be living in a Pig Palace instead of a pig sty, after all there was never really anything wrong with the pig; it was just the pig's choice of accommodations.
Posted by Rev. Criss Ittermann, Life Facilitator at 7:41 PM

Rev. Criss is an initiated Shaman in 3 traditions, an herbalist and activist for women's health rights for over 18 years, and offers her services as a Life Coach, Reiki healer, shaman, confidant, mentor and Interfaith Minister. Rev. Criss was diagnosed with multiple personalites as a teenager and decided not to integrate, and in July 2009 published her first book about being multiple. Her second book is about conquering burnout and recovering passion.

As a Life Coach, Rev. Criss teaches people how to pay better attention to themselves, how to set and achieve goals, how to live into their dreams and even how to allow themselves to have dreams.